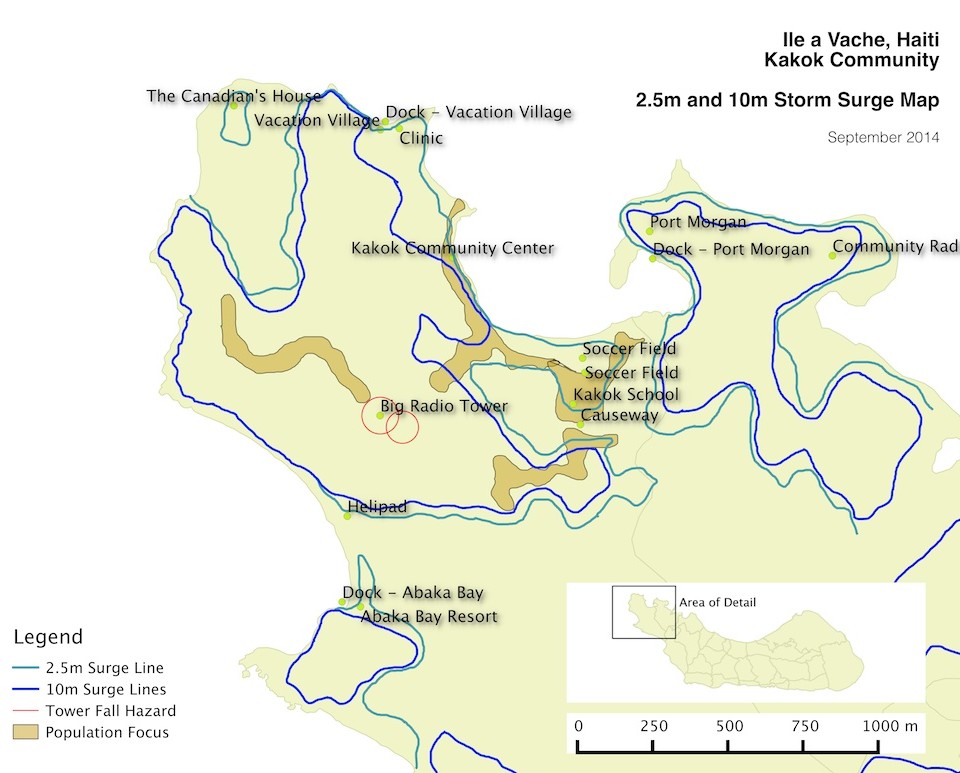 The team collected a large amount of data while working on Ile a Vache.  All of this data collection centered on the development of tools that planners, local government and the communities could utilize to remain safe before, during and after a disaster.

Discussions with local residents, the volunteer disaster brigade on Ile a Vache, and the Department of Community Protection (DPC in French) made it clear that the two hazards most likely to impact the island were hurricanes and wildfire. Of these two, the community focuses almost entirely on hurricanes and other severe tropical weather systems. All interviews with residents mentioned hurricanes as an annual threat, while wildfire was mentioned only a few times.

Further, interviews revealed that only a few residents of Ile a Vache believed the concept of storm surge could kill residents – only wind and rain were consistently mentioned as threats from these storms.  When residents did remember storm surge in a previous event, the accounts of the severity of the surge varied wildly. There was no consistent stories about how high the water could get during a major storm events.

To counter this, the team determined early on to develop a storm surge map for the local communities.

Accurate models of the coastline do not exist (or could not be located).  Without topographic information it is impossible to accurately determine where along the coast storm surge could reach. To alleviate this, the team elected to utilize small unmanned aircraft systems (UAS) to undertake a localized mapping mission.  The UAS carries a digital camera, and takes orthographic still photos at a set time interval as it flies a programmed course.  This series of pictures is designed to cover all of the terrain to be mapped, with approximately 50% overlap in the edges of the photos. That is, between two photos 50% of the area is shared among the two.

The photo series is loaded into specialized software (the team utilized Pix4D Mapper and Agisoft PhotoScan Professional) and the individual photos are digitally combined into a mosaic covering the entire flight area.  This software generates ortho-rectified and corrected mosaics that give a broad overview of the research area.  Further, the software constructs a Digital Elevation Model (DEM) of the flight – in effect mapping the terrain covered by the photos.

The DEMs were used in conjunction with U.S. Geological Survey topographic information to create 2.5 meter contour lines and 10 meter contour lines.  Using The Arbiter of Storms (TAOS) model data on storm surge, it was determined that Ile a Vache has a maximum of maximums storm surge of 10m.  That scenario could be considered the worst case surge in a Category 5 hurricane with landfall at or near high tide.  Realistically the team felt educating the public on a maximum 10 meter surge height would be the best course of action – it is better for people to prepare for the worst and then be pleasantly surprised.

During the planning phase for this project, the team projected covering about half of the island with UAS flights.  Reality on the ground, including weather, transportation (or lack thereof) and security issues prevented many of the flights fro occurring. The team successfully flew 44 mapping missions in and around Kakok, Port Morgan, and Abaka Bay.  Later (and limited) flights were conducted around Mdme. Bernard and Point Est.

During interviews and structure survey missions, the team realized that a large portion of the central community around Kakok is well below the surge line.  In the event of a tropical storm or hurricane a large portion of that community would be vulnerable.  When those population centers were compared to the produced storm surge maps, it was clear that special attention should be brought to these residents of Kakok.

Much of the population of Ile a Vache lives above the 10 meter surge line.  While these residents would be safe from the effects of storm surge, they are still vulnerable to high winds and wind-blown debris.  Further, all residents of the island are vulnerable to degraded food and water supplies after a disaster – particularly water.

Last, the radio towers on the hill above Kakok pose a potential lay down hazards, and threaten the homes located nearby.