The AEMS team conducted UAS flights on both trips to Ile a Vache, though the majority were conducted during Trip 1 in February, 2014.  Two aircraft were used in this project.  The first (and primary) was a SteadiDrone QU4D and a the secondary aircraft (used on a limited basis during Trip 2) was a 3DRobotics Y6. Both aircraft are electrically powered multi-rotors, controlled by a 3DRobotics APM 2.6 autopilot. 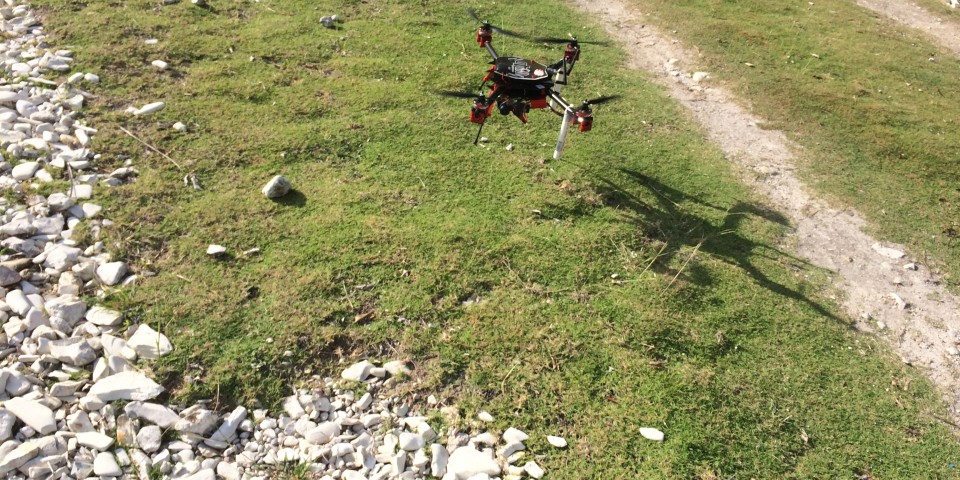 The QU4D, named ‘Tango’ was the workhorse of the team’s operations in Haiti.  Tango has four motors and 10 inch propellors powered by a 5000 milliamp hour (mAh) 16.8 volt lithium polymer (LiPo) battery.  The UAS carries a GoPro Hero Black camera on a two axis brushless gimbal, allowing the camera to remain oriented directly at the ground despite the attitude and maneuvering of the airframe.  With a fully charged battery, Tango is capable of flights of 13 minutes.  The GoPro is set to capture still images at a 10 second interval.

Flights are possible only during daylight hours and in decent weather.  Rain and high wind effectively grounds all of the UAS.

Mapping coverage or each flight was approximately 0.3 square kilometers.  With such a limited area, the team had to fly anywhere from 6 to 12 flights (sorties) per day. This number could have been higher, but limited ground transportation infrastructure required the team to hike between launch sites.

Flight battery packs were charged each night at the end of the day’s operations. 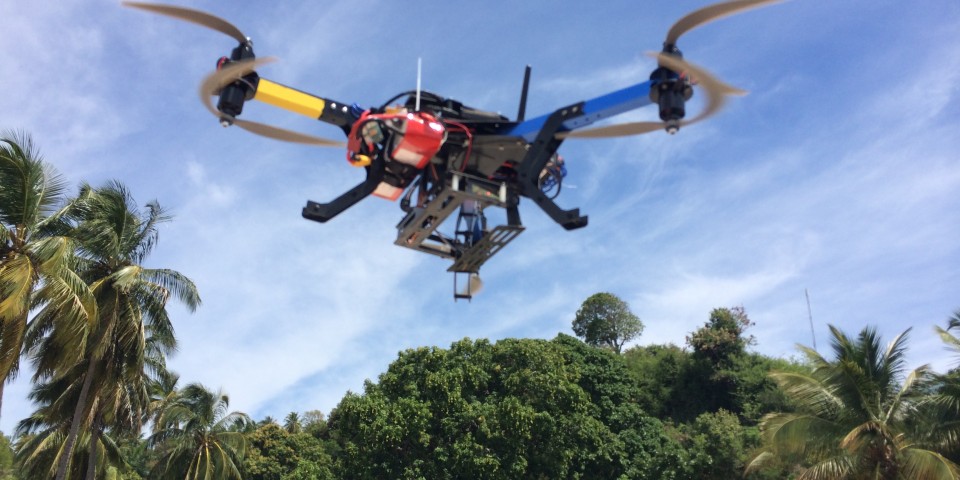 During the second AEMS trip to Haiti, the team brought a second UAS for testing.  Since all primary flying and mapping had been conducted during the first trip, Yankee was used as a proof of concept for new camera equipment and procedures.

Yankee has six motors and 11 inch propellors mounted on three arms.  Each arm hold two motor/prop combinations, one facing upward and one facing downward. This arrangement has three advantages over the ‘quad’ arrangement of Tango.  First, six motors provide significantly increased lifting capacity. Next, the three armed ‘Y’ configuration is resistant to corsswinds; Yankee has a higher wind tolerance than Tango.  Last (and not the least), the six motor arrangement provides redundancy and safety.  In the event a single motor or propellor fails, the aircraft will continue to fly.  In a traditional quad motor design, the loss of a motor results in a catastrophic crash.

Given that some of the proposed mapping missions were to occur of the villages of Ile a Vache, this level of redundancy reduces the risk of AV crash and injuries or damage on the ground.

Yankee is powered by the same battery pack as Tango (5000 mAh, 16.8v LiPo) and they share the same autopilot and Ground Control Station.  This allows for easy substitution of equipment and power supplies.

Ground control of the UAS is accomplished with two separate systems.  The first is a 2.4Ghz radio controller that allows the pilot of the AV (air vehicle) to maintain manual flight control. This is used during takeoff and landing of the AV.  The second systems is a laptop computer running the GCS software “Mission Planner” and connected to the AV via a 900Mhz radio modem link. Mission Planner allows the aircraft operator to program automated mapping missions and instruct the AV to perform them, as well as track the AV position on a moving map display and see realtime telemetry readouts including altitude, airspeed, heading, and power levels.

Post-flight, the GCS collects images taken from the AV as well as positional information from the AV autopilot.  These are then combined into ortho-mosaic photos during post mission processing.

During each sortie there is a designated Safety Pilot (SP) who is in overall control of the aircraft and the mission.  The SP performs manual takeoffs and landings, flys the aircraft during abnormal or emergency conditions and is the person responsible for all actions and operations of the UAS and the crew.  In addition to the SP, each aircrew had an Aircraft Operator (AO) responsible for the operation of the GCS.  The AO programs mapping missions, manages the sensors on the AV, and monitors the telemetry for issues in flight.  In addition to the required SP and AO, each mission may have one or more Observers, tasked with airspace deconfliction, warning of unusual conditions, and getting in the SP’s way.